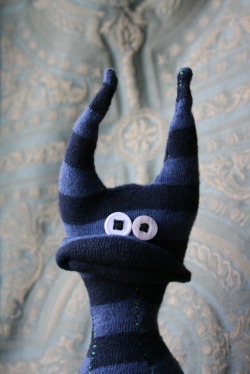 Curtis was so named by his uncle "Burtis" who looked after him when his father "Murtis" met with an unfortunate accident involving a puddle and some quick drying cement, when Curtis was just one day old. Curtis continues to believe that Burtis is his father which is strange given that Burtis only has two legs and no horns.

Curtis loves to trot around the Sunnybank prairie trying his best to avoid the slobbering jaws of Boswell the giant, who lives in the mountains to the east and loves nothing more than stealing young sock monsters in the night and taking them back to his lair to devour their candyfloss like fibrefill innards.